This year’s event, which will be the second to be held in the city, is set to be one of the best events in the UK this year and with thousands of entries already sold, those looking to get a piece of the action are advised to secure their entry quickly for this unique event. 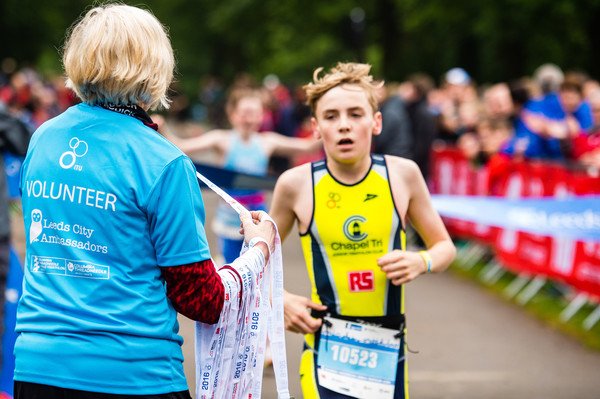 Organisers British Triathlon have today opened applications for volunteers at this year’s event, and are looking for over 500 people to become ‘Tri Makers’.

This army of Tri Makers will be vital to ensure the smooth running of the event, supporting in key roles such route marshalling, registration, transition and elite athlete support. Volunteers will receive training to ensure they’re up to the important task, as well as a free event t-shirt and plenty of refreshments on the day.

Applications are now open for people to become a Tri Maker. To find out more and pledge your support visit leeds.triathlon.org/volunteer

On the back of the inaugural Columbia Threadneedle World Triathlon Leeds in 2016, an extensive review was carried out. As a result the sport’s National Governing Body, British Triathlon, took the important decision to bring the management of the event in-house to rebuild the trust of the triathlon community.

British Triathlon has appointed a dedicated team of experienced professionals to organise the event, many of whom have the first-hand experience of delivering world-class triathlon events both in the UK and internationally.

The much-anticipated UK Sport National Lottery-funded event, organised by British Triathlon in partnership with Leeds City Council and the International Triathlon Union (ITU), has recently revealed new and improved routes for the mass participation events. Amateur athletes will get the chance of a lifetime to race on many of the same streets of Leeds as local heroes Alistair and Jonathan Brownlee, who will take to the city just a few hours later on Sunday 11 June.

British Triathlon have also simplified the event, by the creation of a single transition in Roundhay Park for the sprint and standard distance events. This will minimise multiple pre-event check in locations and limits the amount of transport required for age-group athletes, equipment and spectators. Additionally, a shuttle bus will be in service running from Roundhay Park to the city-centre providing transport for both athletes and spectators between the two locations.

Crowds are encouraged to line the entire length of the route and cheer on friends and family completing. The event will also present the opportunity to see the world’s best in action for free, recreating the incredible atmosphere of last year’s event that saw Alistair and Jonathan Brownlee deliver a one-two finish on home soil, showcasing the city and its residents to a live television audience.

“Volunteering at the inaugural Columbia Threadneedle World Triathlon Leeds was truly a memorable experience, being involved in making the event great for both the amateur and athletes.

“I’ll be the first to put my name down to join the Tri Makers again in 2017, and I can’t wait to head back to the city for another action packed weekend.”

“The first Columbia Threadneedle World Triathlon held in Leeds created a fantastic buzz and atmosphere in the city and it is very exciting that there is now just 100 days to go before the arrival of this year’s event.

“With a packed programme of activities and events also on offer over the weekend to accompany the main event which will see some of the sport’s greatest athletes once again take on our spectacular course in Leeds, the really is an occasion not to be missed.”

“This year’s event is set to be one of the best triathlon events in the world. With organisation by British Triathlon, together with a team of dedicated Tri Makers, Leeds will see a truly fantastic experience for all involved this June.”

For the latest information on the Columbia Threadneedle World Triathlon Leeds and to enter visit leeds.triathlon.org