Children's Event or the Year - Reason to Disability Tri

Nominations for the 2019 Triathlon England Awards are currently open. We caught up with Tracey from Reason to Disability Tri, 2018 Children’s Event of the Year 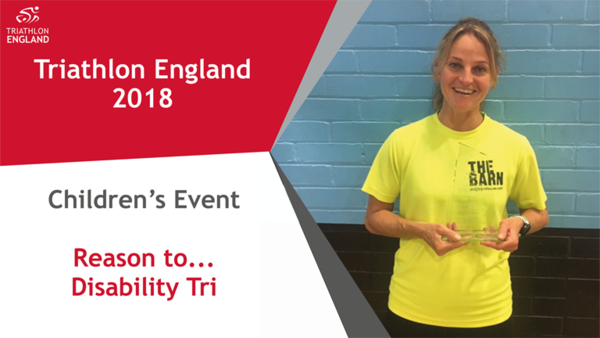 For Jo and myself, as organisers, our reward comes from seeing the kids cross the finish line having battled against their own problems. Whether that’s seeing them walk across the line unaided or riding a bike for the first time ever and having an absolute blast all day.

Whilst the Reason to Disability Tri went on to win an award, having the system in place to nominate volunteers is hugely important, whether those nominated win or not. Just the process of being nominated goes a long way to thank the volunteers throughout the sport and recognises we are lucky to have so many unsung heroes in the background making events, clubs and training sessions happen.

If you want to publicly recognise a volunteer who has helped you on your triathlon journey, nominate them for one of the 2019 Triathlon England Awards before they close on 4 September. There are 10 awards that volunteers can be nominated for: