Mum of two Clair Turner volunteered at the Ironman 70.3 Staffs giving out medals in 2015 with no experience of triathlon.

She couldn’t swim front crawl and she had never ridden a road bike. She came away from the event wondering whether she might be able to do it in 2016. In less than two years, the 43-year-old Oncology Advanced Nurse Practitioner who was working full time has completed the Staffs half - twice, a marathon and more sprint and a Olympic distance triathlons than you can count on your fingers and toes. 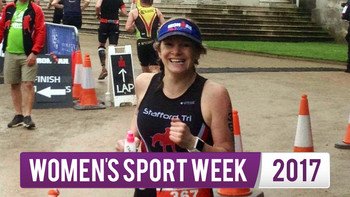 Clair shares her triathlon journey, as part of our women’s sport week celebrations. We hope her story, along with other women we’ll be featuring this week, inspires more women and girls to get involved in sport and give TRI a go!

“Five years ago I took some time off work with anxiety. It was a terrible time, but I found that going to gym really helped, so I started to get into exercise. I signed up for a half marathon the month I turned 40 as a bit of a mid-life crisis and loved it.

“I decided to help out at the Staffs half as my cousin was competing. I had the most amazing day handing out water and medals to the competitors. It was just brilliant. I came away with this nagging question ‘I wonder if I could do that?’ Only one way to find out… so I entered.

“It was pretty crazy as I couldn’t swim a length of frontcrawl and I had never ridden a road bike. But at least I knew I could run a half marathon, all be it in a very slow time.

“I became a triathlon junkie. I read any book or magazine about triathlon that I could get my hands on. There was a bit of a pattern in the books – mocking people who entered half distance triathlons without having ever undertaken one… oops.

“I knew I was going to need some help and support as I had a lot of hard work ahead of me.

“I spoke to a friend who was undergoing chemotherapy and she had completed a few triathlons. She advised that I join our local club, so I joined Stafford Tri Club.

“I went along to a swim session. They asked if I could swim. I said yes. So they asked me to swim 50m in the pool. I set off merrily doing breaststroke. I was informed that as triathletes we generally don’t do breaststroke to save our legs for the bike and run. Oh dear!

“I gave it a go and managed to just about get to the end of the pool – 25m. I felt like crying. I thought there was no way I could ever swim 1.2 miles doing front crawl!

“There was a chap called Mke there who took me under his wing and spent the hour giving me tips on my stroke. I was exhausted, but I thought that if I could improve so much within one hour then I could do this.

“Then I ordered my road bike – that was a minefield. I continued my research and questioned anyone and everyone who might be able to offer advice. I finally found one and managed to pay for it through the cycle to work scheme.

“Then I signed up for a sportive (with cake stops), but there was a delay in getting the bike and it only arrived two weeks before the event, so I had no choice but to go straight to cleats. I fell off three times during the first training session – with many cuts and bruises.

“I did track sessions, swim sessions and a Saturday morning bike rides with the club and the fabulous Mike was there to help and guide me again in all things road cycling. I could not have done it without those sessions.

“Training was going very well. I had started swimming open water and my stroke was coming on. But, with eight weeks to go before the half, disaster struck. I was out doing a gentle jog of the run course and I suddenly felt a tightening in my left calf. I hobbled home and tried to stretch it out.

“I had the Bosworth Olympic triathlon that weekend so I rested up hoping it would feel better. The swim and bike legs were ok, despite me going a little off track as my sighting was out and I’d misjudged a buoy, but when I started the run my calf was tight again. I tried to keep going but only managed two of the four laps. I was really disappointed.

“A sports therapist told me I’d got a partial tear on my calf and I was under strict instructions of daily massage, ice and rest. AND, the biggest shock – no cycling or running until Staffs!

“I was mortified, I needed the last six weeks to consolidate all my training. I was told I could swim but if I did run or cycle I might not make it to the start. He had seen my training on strava and told me I had done more than enough training to finish it.

“Anyway, I did it! I finished it! I got the medal and I got the t-shirt. Then I did it all over again last weekend in 30 degree heat – knocking 30 minutes off my total time. How amazing! I just can’t believe how far I have come in such a short time. Triathlon really has changed my life.

“If you ever have a little voice in your head questioning how you could possibly think about doing a triathlon, ignore it. Join your local triathlon club and give it a go. If I can do it then anyone can.”

Inspired by Clair’s story and wanting to give TRI a go? Visit gotri.org to find GO TRI gym sessions and events near you.

Could you be our next case study?

We’re always on the lookout for stories to share. If you’ve got a great GO TRI story, drop us an email info@gotri.org and we’ll be in touch to find out more.