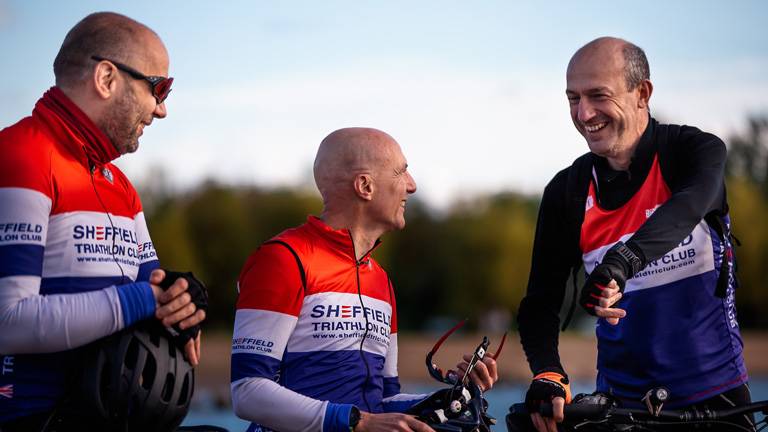 Down’s syndrome, triathlon and me

Jade Kingdom first got into triathlon in 2018 and competed in the sprint distance race at the 2021 London Triathlon to raise money for The North Devon Hospice.

Having seen her brother-in-law Tom complete a half ironman distance race in 2018, Jade decided that it was a challenge she wanted to take on: “I thought, that’s what I want to do,” she says.

“Whilst spectating I loved the reaction of the spectators who were cheering and encouraging each and every passing competitor. I have always liked swimming and was amazed that these athletes had completed their swim and were following it with a bike and run.

“At this point, I knew I had to do a triathlon and, before I knew it, I was doing my first ever triathlon, the supersprint distance at the London Triathlon.”

Down’s syndrome is where someone is born with an extra chromosome and results in them having some level of learning disability and impacts on physical development. For Jade, she finds that the impacts are around balance, coordination, cardio-respiratory and thyroid issues.

“With regards to triathlon, I found that cycling was very difficult due to balance and coordination issues,” she commented. “I needed to be able to have my feet touching the floor whilst sat over the bike and found that my handle bars were narrow which made me wobbly on the bike.

“To overcome these difficulties was not easy but I adapted a children’s race bike. Longer handle bars increased balance and coordination, a smaller frame to allow me to stand over, narrow wheels increased speed and larger pedals ensures constant power. The biggest change however was total dedication to consistent training.”

Jade joined North Devon Triathlon Club to help with her training, attending their weekly swim sessions and completing her bike and run training.

Having previously completed the supersprint distance the London Triathlon, Jade wanted a challenge to push herself and inspire more people to get active, choosing the sprint distance race in 2021 as that challenge and racing alongside her brother-in-law who had first inspired her. 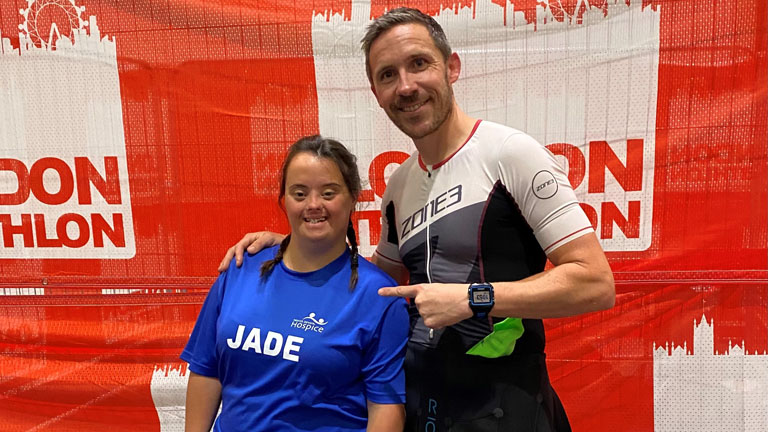 Above: Jade with her brother-in-law and coach, Tom

“Race day was amazing,” she exclaimed. “I decided to enter the 2021 London Triathlon sprint distance for a few reasons.

“Firstly, I wanted to inspire people, not just someone with a disability but anybody. If I can inspire just one person to have a go at something they would not usually do then I have succeeded.

“Lastly, I wanted to raise funds for my favourite charity, The North Devon Hospice. The Hospice is a personal favourite of mine as over the years I have known many people, patients or families who have relied on their brilliant and vital work. For me the fundraising was of upmost importance and it was a major factor in keeping my training consistent.”

Jade completed the course in two hours and thirty-nine minutes, well inside her target of three hours and achieving PBs in each discipline.

“I began the run very slow. I had felt good on the bike but when I transitioned to the run I realised that my legs were shot,” she added. “My most difficult discipline was now going to be infinitely more difficult.

“My body was drained, I was physically spent and mentally I was breaking. I briefly cried and considered quitting. Tom stopped me on the run and asked me why I was doing the triathlon. I reminded myself of all of those reasons and thought of all of the people who had supported me along my journey.

“Not wanting to let them or myself down I regained my composure, took on some fuel and got back to the job in hand. Before I knew it I was running down the red carpet to the finish line, arms aloft feeling like I was winning the Olympics.”

Jade’s journey in triathlon is one that she’s set out on to enjoy, challenge herself and inspire others, whether with or without a disability, to get active.

“I don’t have a message to just people with Down Syndrome, my message is to everyone, disability or not,” she concluded.

“You can achieve anything if you dedicate yourself to it. I have found that there are many benefits to physical activities. My physical health has improved, my mental well-being has improved, my confidence has improved, I have met many new friends and I no longer feel socially excluded.”

You can donate to Jade’s chosen charity, The North Devon Hospice, and find out more about her journey on her Instagram channel by clicking on the buttons below.

For more information about swim, bike, run events, visit the British Triathlon Event Search to find opportunities near you.