As GO TRI Organiser of the Year 2018, we caught up with Sue Heppell from Ponteland Runners to hear what becoming a Triathlon England Award Winner meant to her. 2019 Nominations are currently open, allowing you to nominate a volunteer who goes above and beyond for the sport. 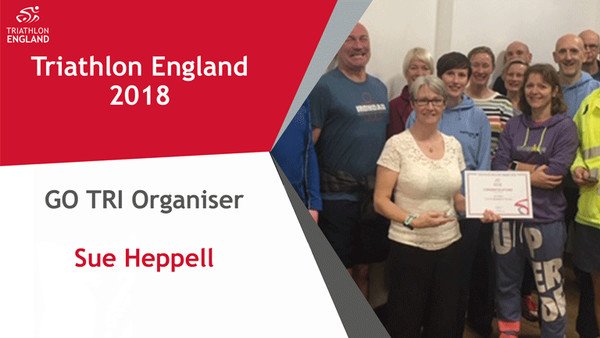 I was really excited when I heard that I’d been nominated for the North East Award, but to have won that and then the Triathlon England Award was such as thrill! I really didn’t think I had a chance of winning!

The aim of the events is for people to discover the sport and enjoy the achievement of finishing an event – hopefully their first of many. Being nominated for this award was so lovely, because you know that people will have enjoyed the events and taken the time to nominate. It gives you such a buzz to be nominated and is a real encouragement to keep organising the events.

We volunteer because we love what we’re doing, so to know that it is appreciated and worthwhile is such a lovely feeling. It’s also great to know that we are valued by our National Governing Body too through this national awards programme.

Winning the award has helped raise the profile of our events, and we keep getting more and more participants coming along to the events which is brilliant for the club and for grassroots triathlon. I’d definitely recommend nominating a volunteer or an event in the 2019 Triathlon England Awards because it’s given our whole club a real buzz and motivated us to keep putting the events on!