On Saturday 12 November at Loughborough University, triathletes, coaches, event organisers and volunteers from across England gathered together to celebrate the successes of the sport with the annual Triathlon England awards.

The awards ceremony highlighted the contribution of our winners, with successes celebrated across a range of categories across clubs, coaches, technical officials, events and volunteers. Prior to the awards a number of workshops were on offer during the morning, which provided triathletes, coaches and enthusiasts an opportunity to develop their skills and enter discussion with like-minded individuals from across the sport. The workshops were open to all and covered a range of topics including clean sport, social media and a BAME consultation.

To conclude the day Triathlon England and British Triathlon had their respective annual AGMs which was the perfect opportunity for Home Nation members to have their say on the future of the sport. 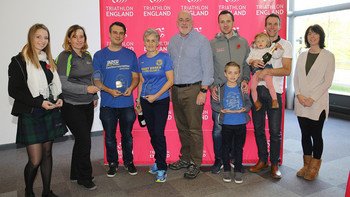 32GI Eastbourne Triathlon Event Organiser, Richard Campbell said upon receiving his award “I can’t tell you how I feel right now. I’m speechless and emotional. We are so proud of everyone. If it wasn’t for the lifeguards and our two local charities, St Wilfrid’s Hospice and the Eastbourne Voluntary Lifeguards, we never would have won the award. I’m speechless but so proud”

Bill James, Chair of Triathlon England said “It’s great to see the Triathlon England Awards recognizing people in our awesome sport for what they give of their time and of themselves to make triathlon what it is for so many of us. The smiles and applause at the Awards tell us how much they are appreciated better than I can. Like many other sports we depend so heavily on volunteers and it’s wonderful that we can nominate and reward some of them for what they do.”

Interested in becoming a Home Nation member? Join us now and receive some great and exclusive benefits.