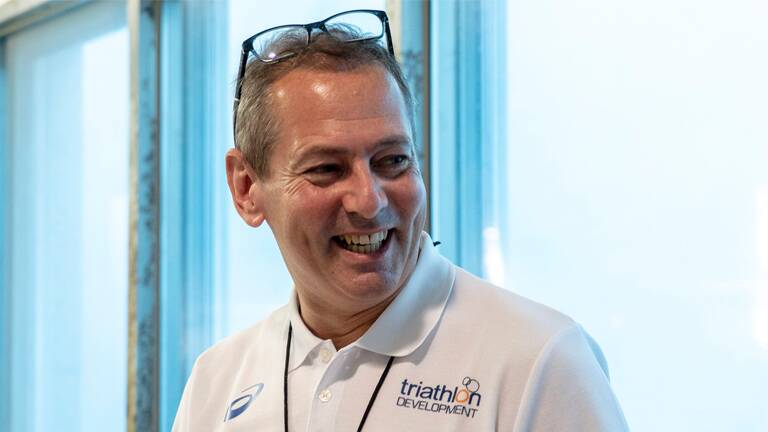 From not owning a bike to becoming an IRONMAN

George Kirkham is a 34-year-old triathlete from Lowton who spent 12 years in the army before becoming an anaesthetic practitioner. He didn’t own a bike when he signed up to 2021 IRONMAN UK, but since that moment, his passion for swim, bike, run has continued to grow. He’s now shared his story with Triathlon England’s January newsletter.

“If somebody said to you that they had signed up to an IRONMAN without owning a bike you would probably think they’re mad, but that was me in 2020.

“I have always liked to live on the wild side. I like being active, I like being outdoors, so triathlon seemed like a natural challenge for me, but never did I expect to go from representing my country in the army to being able to represent my country in sport.

“I have lived in Lowton since I was a child and, with the village being near to Bolton, it has its own connections to IRONMAN UK. I had been to see the swim start a few times and I’d be lying if I said that it hadn’t been at the back of my mind to enter.

“It always felt like a mammoth task. I spent 12 years in the army, so I was fit, and I was used to running, but I don’t know what it was, just the idea of running a marathon was quite daunting at the time.

“I was out running when I decided to sign up for IRONMAN UK. It was during the height of the Covid pandemic when I was working for the NHS. It was a difficult time for everyone and working in the healthcare system there was obviously a lot of stress. It was the first time since I had been to Afghanistan in 2009 that I actually felt that pressure again.

“Not only that but it was the stress of having to stay in all the time when I wasn’t at work. I’ve never liked being stuck in one place. I’m always wanting to move about, do stuff, and be outdoors if I can. So just sitting in the house got to me. I was drinking a bit more than I had done previously, I would finish work and then have a beer when I got home. I put on about two and a half stone.

“That was when I realised, I had to do something. I just got up one morning and decided to start running. I went out and I really enjoyed it. I ended up doing 13 to 14 miles on that day. It’s amazing what just getting out and exercising can do to you. Something just clicked in my head, and I wanted to start getting involved in bigger events. That’s when I signed up for IRONMAN UK.

“My wife just initially laughed and just said ‘alright, whatever’. She thought it was another flying decision that I had made and didn’t think I was going to do it. I’m not surprised because at the time I didn’t even own a bike.

“But she’s honestly been so supportive – the whole swim, bike, run community has. When I mentioned the IRONMAN to my colleague, Sean Grimshaw, he signed up too and we started training together.

“The day we did the IRONMAN was unbelievable, the whole experience was. It had been my goal for over 12 months, and every day I had thought about that goal. When I got there, I just soaked up all the energy and atmosphere. I just couldn’t wait. Once I registered, I didn’t even want to go to bed that night. I wanted to get on the course and get it done.

“I was feeling the fittest I ever had done. I felt like I could jump over a building if I needed to. I have never felt that much energy than I had that day when I registered.

“On the morning of the race, I got there, I was absolutely buzzing. The race didn’t quite go to plan. I had a really good swim, I got out, I got onto the bike and, as I was riding out of Pennington Flash where the swim is, there’s loads of speed bumps and on the last speed bump my boa on my cycle shoes snapped.

“For 56 miles, I was riding with like a flip flop on. I got the biggest blister I have ever had on the back of my foot because my foot was sliding in and out. I managed to get to an aid station and just tape it up, so it didn’t move anymore. My bike was slower than I was hoping for, and then the run was a bit impacted because I had a massive blister, but I wanted sub-14 and I got 13 hours and 40 with everything that happened so I was happy.

“The finishing moment was an unbelievable feeling. When I ran through and I became an IRONMAN, I was with Sean at the time. All the way down the red carpet I was beating my chest, I was screaming. I really soaked up that red carpet atmosphere. It was unbelievable.

“It’s going to be busy a 2023. There are 20 events planned in total including Norseman, IRONMAN Barcelona and I’m looking forward to representing the GB Age-Group Team at the World Aquabike Championships in Pontevedra.”

Use our event search below to find an event near you.