The 14th edition of The Vitruvian Triathlon on Saturday, organised by Pacesetter Events featured something that is thankfully rare in the history of this race. Rain. The weather seemed to be making up for many previous sunny events however, with the downfall beginning before the swim start and not letting up all day. It made it a challenging, damp and cold experience for the well over 800 athletes that started from a sold out entry, which was north of 1000.

The conditions didn’t seem to deter Catherine Jameson however. Gaining an advantage of more than two minutes during the two-lap, 1.9km opening swim section, Jameson was never threatened and by the end of the first lap of the rolling bike course, she had built a lead approaching ten minutes. Her day wouldn’t be completely incident free however. Setting herself the goal of reaching T2 ahead of the leading men (who started ten minutes behind her), she was on track to achieve that before a mechanical issue left her wrestling with her chain for several minutes in order to complete the course. Using the race as her final preparations before the ITU Long Distance World Championships in Oklahoma, Jameson was steady through the run, eventually crossing the line with a winning margin of 12 minutes.

That’s another Vitruvian victory for the Jameson family as Catherine’s husband, Joel, is the Men’s course record holder.

Veteran athlete Ruth Hutton (50-54) proved that she is still a force on two wheels, starting the run in second place. She was passed by Becky Hoare (25-29) and Zoe Smith (30-34) during the half marathon, but would take fourth overall and Triathlon England Gold in her division.

Fastest man on the day was Will Cowen (19-24). Just seconds behind Chris Hine (19-24) out of the swim, Cowen moved to the front on the bike and by halfway had built a slender 40-second buffer over Matthew Nelson (19-24). He showed no signs of letting that slip over the second lap and by T2 his lead starting the run was 2:15 over Nelson, with Ashley Hurdman (25-29) now in third place a further 35 seconds behind.

Cowan said, "Having raced the Dambuster Triathlon back in June, I knew the challenge the course would present. It was great to execute my race plan well on what was a pretty miserable day!" 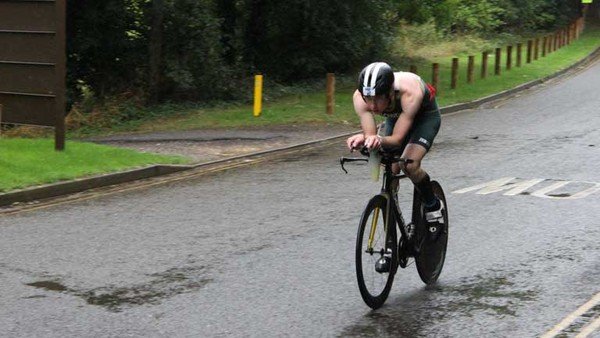 Starting in a later wave, uber-cyclist Matthew Bottrill (35-39) had overcome a slow swim, gaining 250 places over the 85km to start the run in fourth position based on time. A bike split time of 1:59:16 represented a course record, the first athlete to crack the two-hour mark at this event.

A strong run from Cowen extended his lead further once off the bike and he would finish with a winning margin of over four minutes. Starting in a later wave, Gary Laybourne (35-39) was absolutely flying through the run course. In eighth position after the bike, a 1:15:42 run split not only meant that he climbed to second overall, but also passed Matthew Bottrill in the process to take the Gold medal in his category. Hurdman just got the better of Nelson on the run to take third place overall.

The 15th edition of The Vitruvian will return on Saturday 9 September 2017 when the race will host the British Triathlon Age-Group Middle Distance Championships.